Cardiff 1919: Riots Redrawn is a vivid day-by-day, hour-by-hour account of the Cardiff race riots, pieced together from reports in local newspapers, following the dynamic ebb and flow of the rioting.

On 11 June 1919, Cardiff was plunged into four days and nights of violence that left three dead, and buildings wrecked and burnt. The Western Mail of the time called it:

But we all know that there are so many different stories behind what’s reported in the news.

Cardiff 1919: Riots Redrawn is a digital graphic novel by Butetown Artist Kyle Legall. It's an evocative digital experience that combines spoken text and illustration to conjure up the atmosphere, people and places involved in a shocking moment of racial conflict and violence on the streets of Cardiff.

Pieced together from reports in local newspapers, Kyle’s drawings also draw from the accounts and stories passed down the generations of a moment of trauma that left an indelible mark on the Butetown community.

Combined with a soundscape by Chris Jenkins and voiceovers by Ali Goolyad and Mike Pearson, this vivid, visual day-by-day, hour-by-hour account follows the dynamic ebb and flow of the riots, immersing you in the visceral madness that took place on our capital city’s streets 101 years ago.

This is a digital experience that you can explore from home, but can also be experienced as a physical (socially distanced) walk through the places the events took place. Walking the streets where the events of the past are ingrained into the fabric of the pavement, tracing step by step in an immersive, evocative experience, will bring us far closer to these events than we can ever get reading accounts in historic archives or watching what plays out in TV news reports.

Connect with the forgotten history of Cardiff 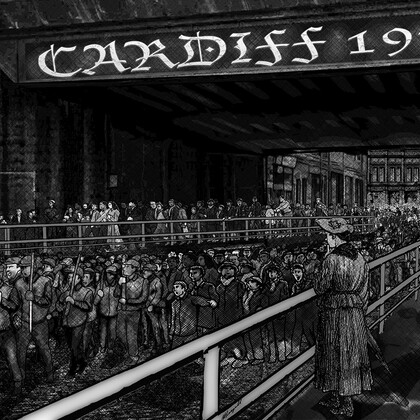 Cardiff 1919 contains images and descriptions of extreme violence and contains language, including racial slurs, drawn from historical documents and accounts which may be offensive.