“It is possible to take people to a place where they feel they can safely let go of life.”

As a national theatre company we talk about how we can act as a mirror and a microscope for our collective understanding. To spark conversations or shift change in some way. Gazing hard into the themes and ideas that Gavin Porter and co are looking at at the heart of Circle of Fifths has opened up a whole world of amazing, progressive change-making work happening out there, that we’ve been compelled to explore more of.

There is a quiet but powerful, compassionate movement to end the stigma that exists around grief and dying. This feels fundamental to us all. Compelled by this area of social change, we reached out to some of the people doing this hands on work. That’s when we met Yen Robinson…

Yen began her journey to becoming an end-of-life doula, or ‘a friend in death’ as she prefers to call it, after the loss of her father. Her experience sparked a drive to educate herself and others to understand and better prepare for what it means to die, so she began training with Living Well Dying Well.

Yen believes that no one should need to face death and dying alone – physically or emotionally. She trained to guide people to face things together, and to offer nurturing support to overcome the fear people feel when confronted with death and loss.

It’s a rich and inspiring conversation, one that only scrapes the surface. But we all have to start somewhere…

What is an end of life doula?

To understand what an end-of-life doula is, it helps to look back in history. We all die but how we die has changed dramatically over the last 60 years. Years ago, it was a family and community affair with occasional medical support, now it is too often medicalised, hidden away from us, old age and dying for the majority taking place in hospitals and residential homes.

When something is hidden away, we develop a fear of it, we have become unfamiliar with what happens as people approach the end of their days. We have lost the language and confidence to be comfortable around death. End-of-life doulas have evolved a non-medical role to bring the skills and knowledge that our forefathers had around death and dying back into our communities. They support and empower people with a terminal diagnosis by walking alongside them and those they love, offering emotional, practical and if wanted, spiritual support.

How has your role changed your perspective on life and death?

Before I undertook my doula training, I was cut and dried around life and death – you lived, died. End of. Too frightening and big to contemplate. How could it be possible that we cease to exist after death?

I feel quite differently now. Of course, the fear hasn’t completely disappeared. Still, being open to talking about death and dying, spending the time to reflect, listen and read widely around the subject, I understand now that we exist as energy. Energy doesn’t disappear but changes from one state to another when something dies.

How does music and creativity help your work?

Hearing is apparently our last sense to go before we die. There is comfort in listening to music and hearing familiar voices. Rites of passage since time began have been accompanied by music, the spoken word, and singing. We can use music to take people back to memories and feelings that emote and bring about relaxation.

When people become unable to move from their surroundings, we realise the importance of their immediate environment, we may bring in colours and textures that soothe to soften the harsh white of the hospital ward perhaps.

As doulas, we work with imagery, guided meditation and visualisation, powerful tools that can bring deep relaxation, and inner peace, and where in experienced hands it is possible to take people to a place where they feel they can safely let go of life.

Do you think attitudes towards death are changing?

Yes definitely, although there is still a lot of fear and reluctance to engage in talking and thinking about death. However, there is a growing movement, both in the general population and in some areas of the medical community looking to change the ways we think about death and dying. There has been an upsurge in Death cafés, they can now be found in many towns and cities showing people want to talk about death and dying. The success of the Good Grief Festival and Dying Matters reflect that.

What do you think we can do as a society to become more comfortable talking about death?

Education, and exposure. Bringing the subject into the school curriculum from the early years. Allowing children to attend funerals, to see ‘grannie’ after she died.

Change the scary language we use around death; alter the way it is so often portrayed in the media. The media in all its many guises is so present in our lives, it can give us exposure to things that we would never otherwise experience, let’s use it to get the word out that thinking and talking about death doesn’t make it happen!

Discover more about the show 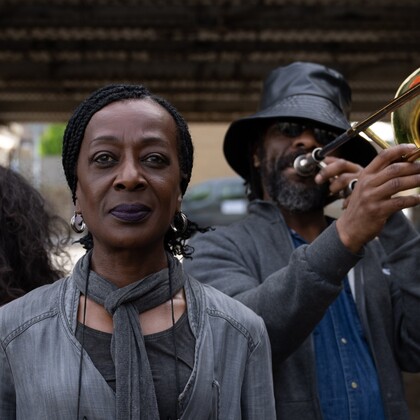